“... there is very little difference between the dark room at the top of the Desert Inn in Las Vegas and the retreat to the desert of the ancient hermits in search of the Eternal.”
Paul Virillio – The Aesthetics of Disappearance

Kaja Silverman has talked about two modes of identification: ‘heteropathic’ where the subject aims to go outside the self, to identify with something/someone/somewhere different and ‘canabalistic’, where the subject brings something other into the self to make it the same. These two modes of identification often operate through ‘styles’ or ‘rhetorics’ of consumption – through what we say, wear, eat, through where we’ve been and where we’re going. This two-way street – with its parallel movements towards difference and sameness – is interesting to consider in relation to food and travel.

Critical debate around modes of movement, from flânerie to nomadology, has recently concerned the figures of the traveller and tourist. I tend to see the traveller in the ‘heteropathic’ mode – desiring difference – and the tourist in the ‘canabalistic’ mode – desiring the same. Our relationship with food could also be understood in the same way. On the one hand, eating is essential to self-maintainance, to staying alive, to producing more of the same, on the other hand, food is a transformative substance, it has the capacity to change us, physically, and psychologically. So, when we move and when we eat, are we aiming for difference to transform ourselves, or the same – to incorporate external things and places?

These questions run through Safe Way, David Blamey’s contribution to ‘Backpacker’ (January 1997), an international cultural festival held in Chiang Mai, Thailand where the brief was to engage in a dialogue between invited British artists and artists resident in the pacific rim. Blamey likes new people, new food, new places. Travelling, conversing and eating are important to him to be ‘elsewhere’. But for Backpacker, he spent a week alone in a hotel room in Chiang Mai preparing, cooking and eating food out of a suitcase he brought with him from England. By remaining apart from the setting he refused to do what we would normally expect of the tourist, to assimilate the other, but he also resisted the traveller in himself by not going out to experience a bit of the ‘other’. By keeping himself separate he he succeeded in keeping himself intact, but within the context of Backpacker, his absence strongly exhibited his difference. More heteropath than carnivore one might say.

Concerns with eating-related issues such as genetic crops, corporate farming and the recent foot and mouth scare in the UK have focussed our attention on the politics, economics and culture of food production and consumption on a local and global scale. There is a rising ethical concern about what we eat and where it comes from. Should we buy local and therefore cut down on global warming by reducing fuel consumption in the transportation of foodstuffs? Or should we support resistence to the globalising forces of multi-national agriculture by buying food grown ‘locally‘, but from the other ide of the globe? Food makes tangible the most complex patterns of origin, migration, colonisation and cultural hybridity. With this in mind, what do we make of the list of food items contained in the artist’s suitcase, bought in a London super-market and taken out to Thailand? What we chose to buy to eat is an attempt to tell others who we are – how we are alike and different from those around us, how much of the world we know and how much is alien to us. This selection of food is the choice of someone who knows about the world.

The location that was chosen to site this work was also of significance. Hotels occupy a boarderland, somewhere between public and private space, a place where strangers are intimate behind closed doors. The hotel that Blamey stayed in was a furtive kind of place, where cooking was prohibited in the rooms. Low-key, low-brow international style from the outside; run-down jaded elegance on the inside. Moist bed, damp walls, cigarette burns, sordid, but not so much as to be that interesting – until on the last night he found a crack pipe taped to the underside of the table on which he had been eating his meals every day.

Hotel rooms offer the most extreme example of our ability to colonise space. As we place our soap tentatively between the taps, the yellow stain on the basin enamel is not so bad, it has become ours. In such strange destinations, transitory places where people move in and out overnight, our need to make a hotel room a home in a small space of time inspires our most canabalistic instincts. As Blamey cooked and ate his meals, breakfast, lunch and dinner, day after day, night after night, he developed rituals adapted to the specific layout of the room. Mini bar became fridge, lockable suitcase acted as storage cupboard, the table between the beds was used when boiling water, the dressing table designated a frying area, the tiled surfaces of the bathroom adapted as a preparation zone and the bathtub utilized for dishwashing. The strange juxtapositions, washing pans in the bath, olive oil next to shaving cream on the bath ledge, also work to transform the room, to give it a new life. But the transformation is not complete, and not very comfortable. The objects do not quite get assimilated. It’s something to do with the secretness of his cooking, the need to hide the evidence. It makes one feel sorry for him, feel the fear of not belonging, of alienation, of being found out. I’m reminded of the desparateness that being alone in the city can bring, when access is denied to a ‘real‘ home. There is a pathos about this work; it serves as a potent reminder of those who do not choose to keep themselves apart, but who are forced to live in hotel accommodation and survive this way for months, years on end, living as outsiders, furtive, anxious prisoners in their own home.

Blamey holds a particular fascination for the sorts of mundane details and boring little tasks that pass us by. By focussing our attention on the ‘everyday’, often by acts of repitition, the small things that normally go unnoticed take centre stage and acquire all kinds of new meaning. This brings to mind Henri Lefebvre’s differentiation between the practices of everyday life that make us into docile creatures simply repeating tasks and reproducing the status quo, and those which serve as acts of resistance – tiny moves, moments that delight in creating a different order. And taking up Michel de Certau’s terminology, this approach is tactical rather than stratigic. It is counter practice on a micro level, not just in terms of scale but in terms of visibility – and effort. Blamey’s processes appear to fall into his lap, located, following Kaprow, on the territory between art and everyday life. His work focusses our attention on the significance of some of the quite ordinary things that happen all around us, all of the time. 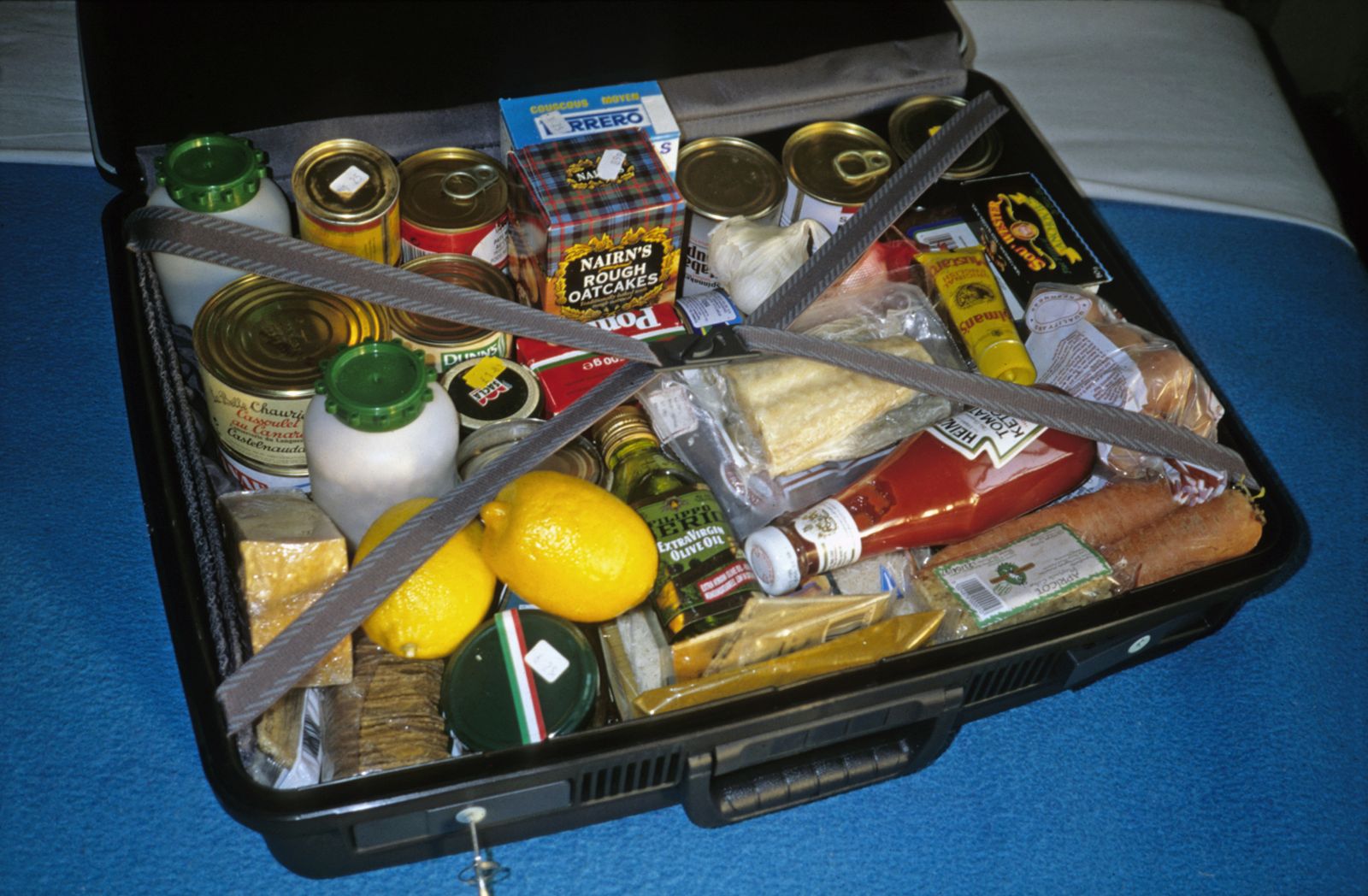 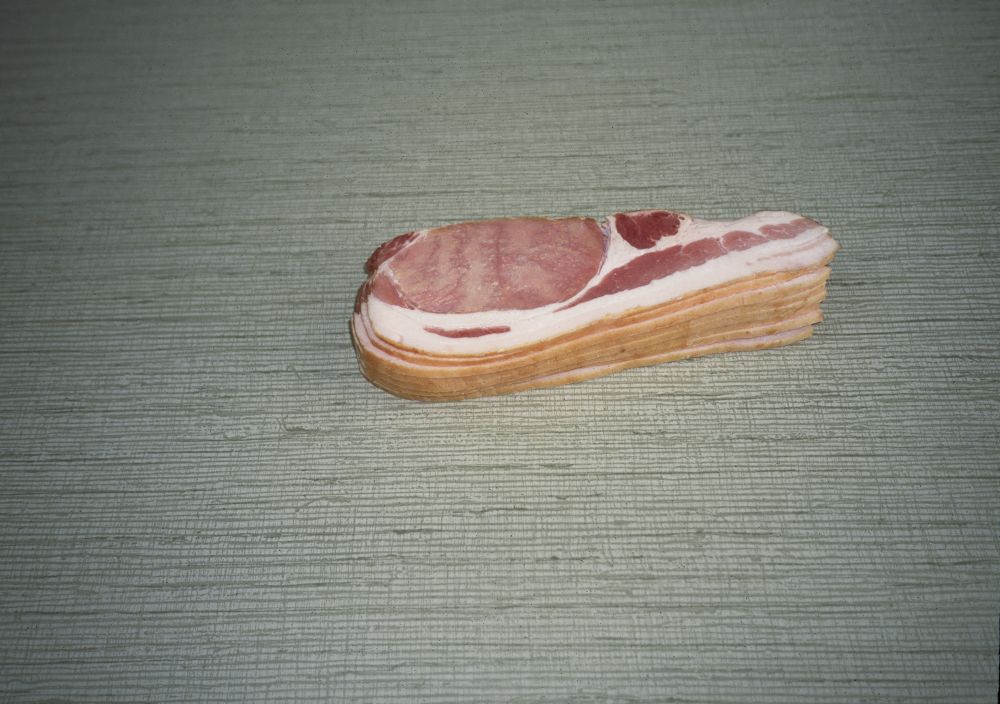 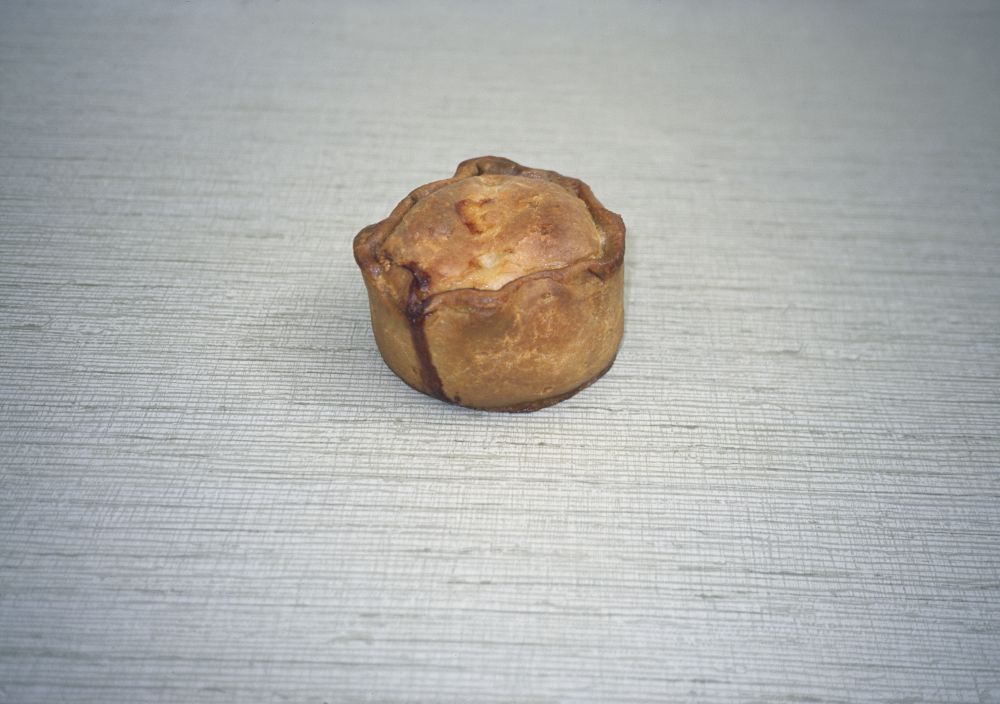 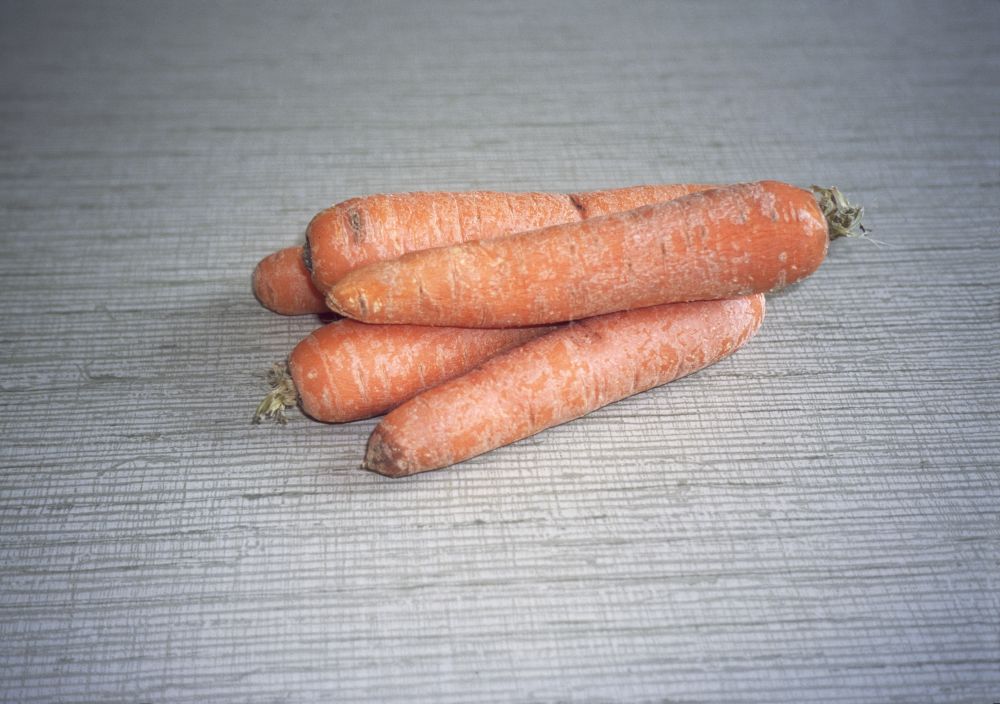 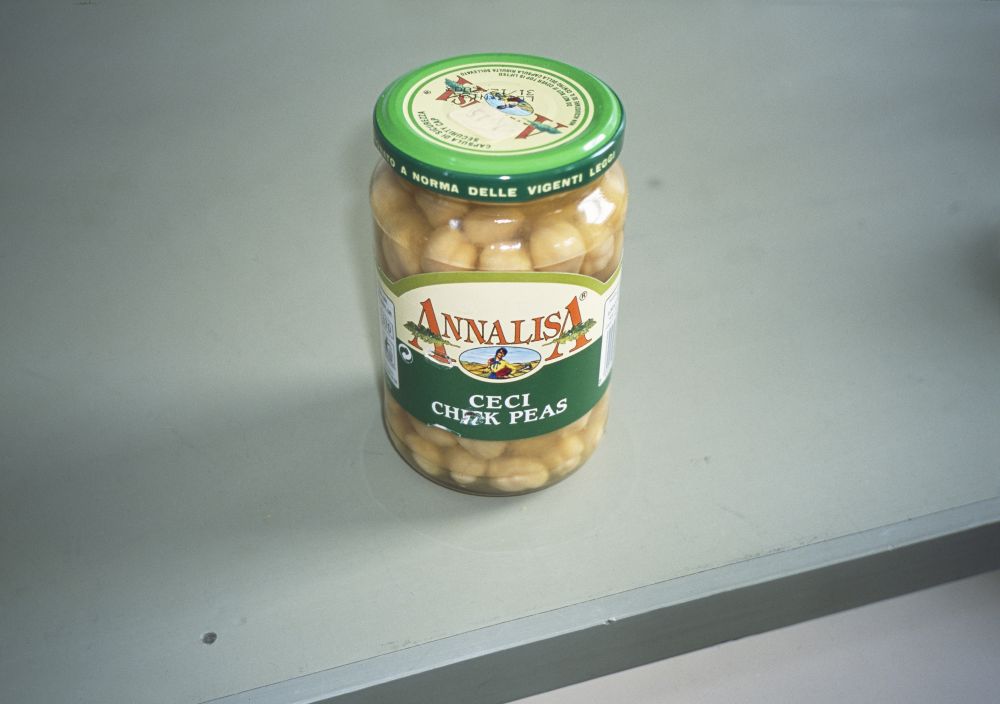 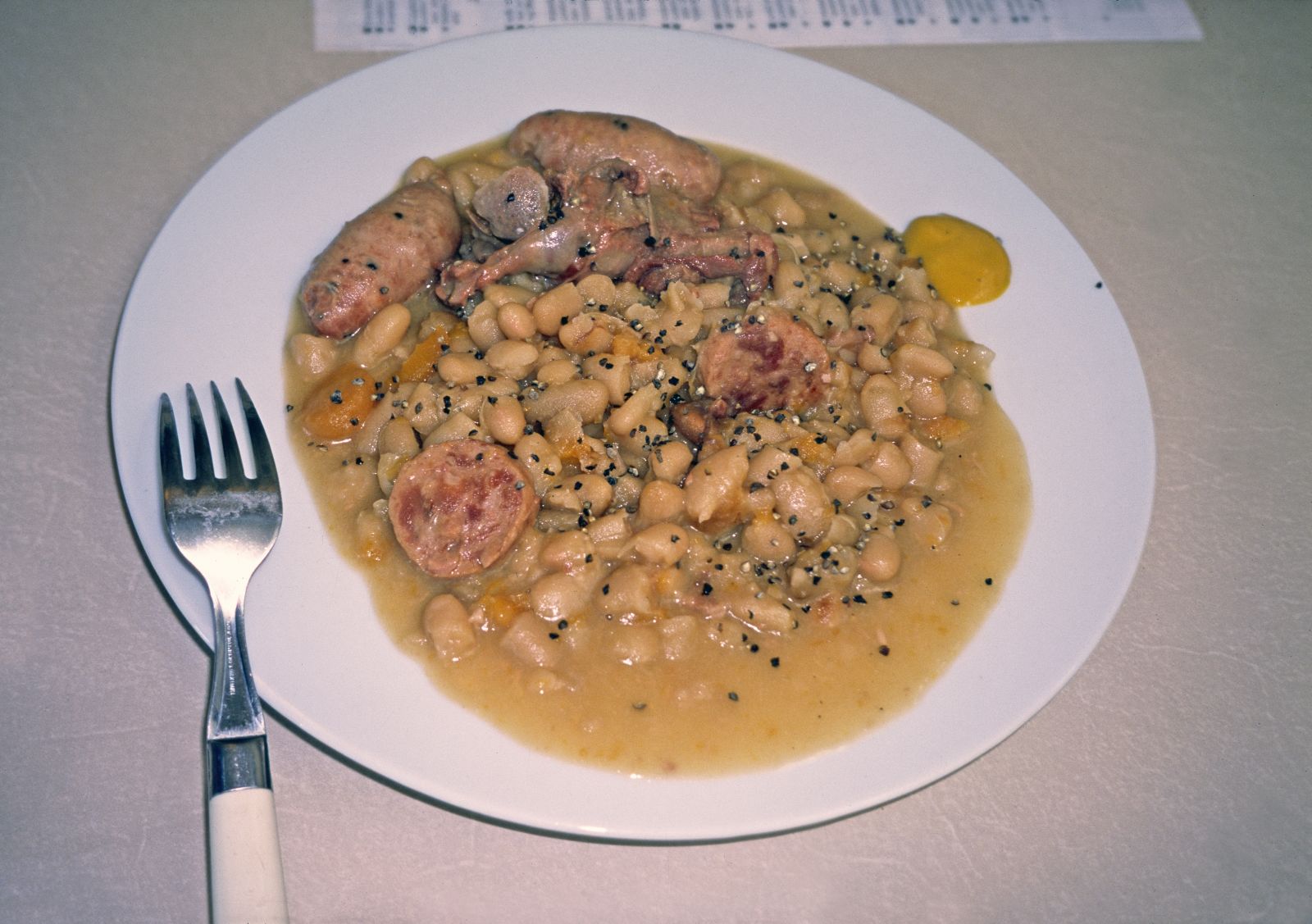 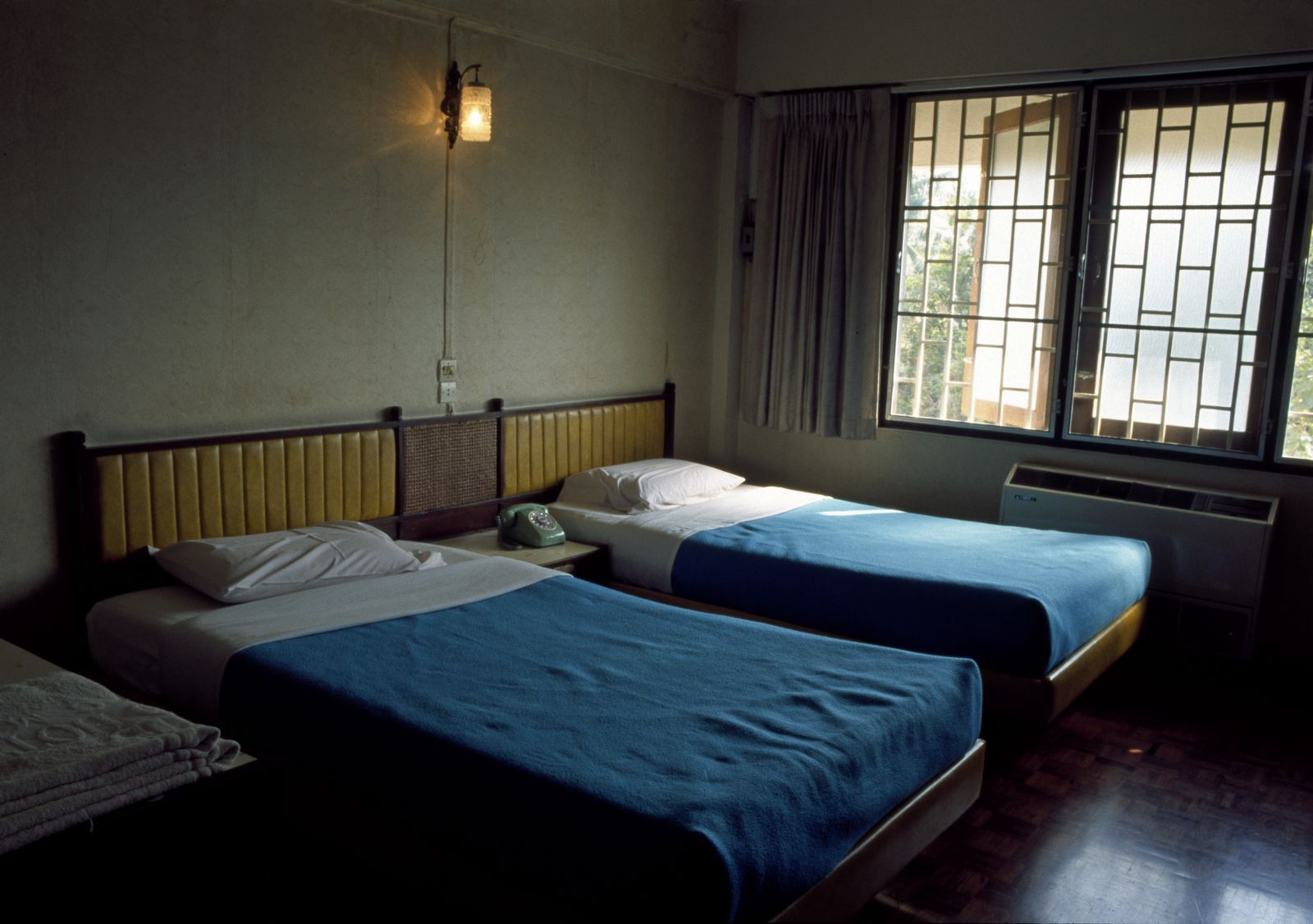 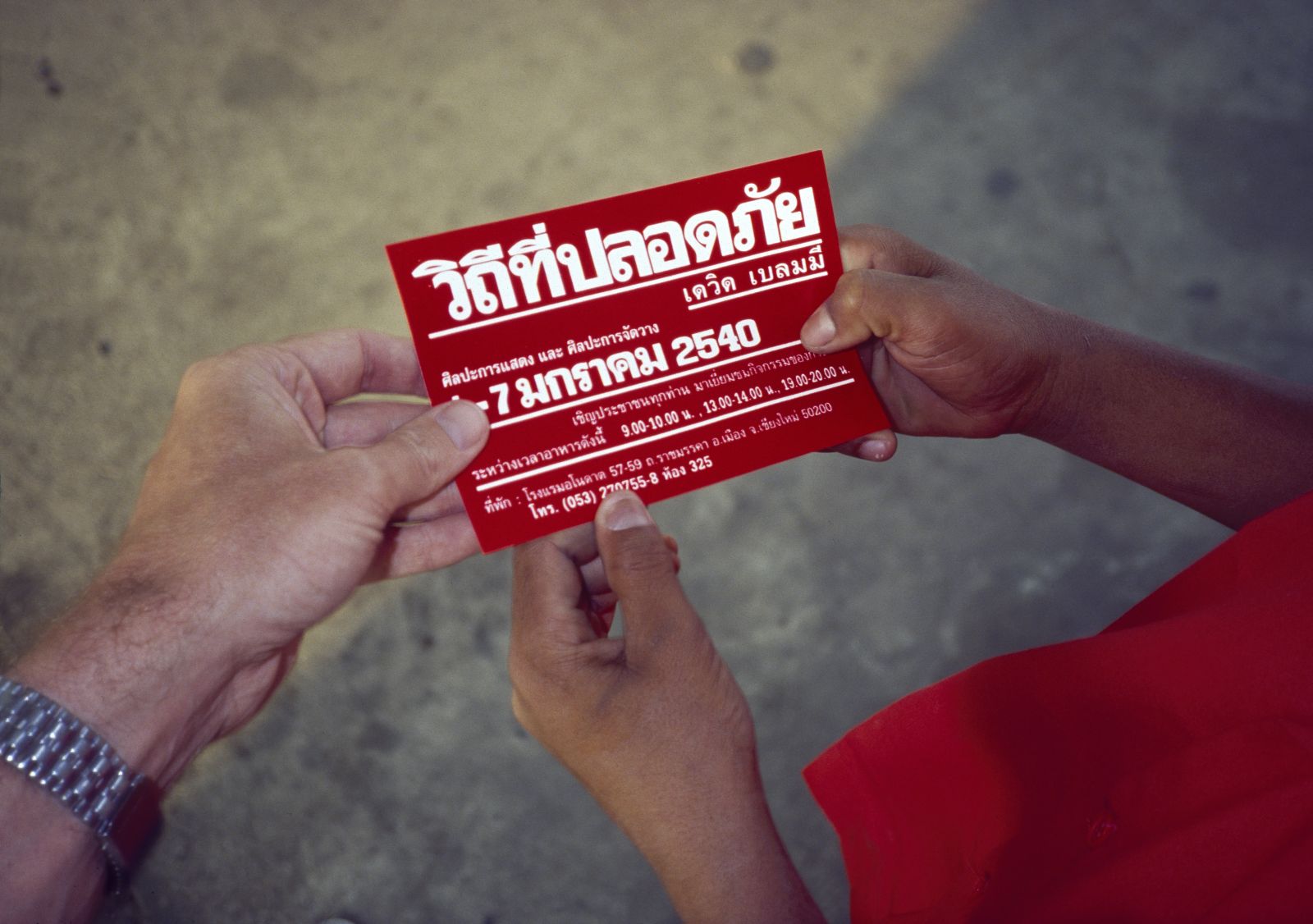 A week's food shopping carried from London to Chiang Mai, Thailand in hand luggage and consumed over a week in the privacy of an affordable hotel room. Project for 'Backpacker' exhibition.